After being single for six months, learning quite a lot and experiencing the darker side of human nature, I’ve made like Cheryl Cole and secretly found myself a bit of ol’ romance.

No, I haven’t got married but I have got a boyfriend. My 25-year-old ass is firmly off the shelf and I’m pleased to report I’m quite smug about the whole thing.

Without going into too much detail – because let’s be honest, no one ever actually wants to hear about vomit-inducing happiness – I’ve basically ended up with my high school crush.

In all honesty, I didn’t think I’d really bother with the whole relationship shebang again, in fact I was gearing up to buy a few more dogs and pack up, off to Scotland armed with a one-way ticket.

But, out of nowhere a flash from the past and some excellent banter led to something that was worth not heading to the highlands.

So you see, there is hope. I’m not saying you need to have someone – far from it in fact – but if some love and romance is what you’re after, it will come.

And on that note, I’m going to sign off before love hearts start to make an appearance and I make myself throw up thanks to all of the sickly happiness. 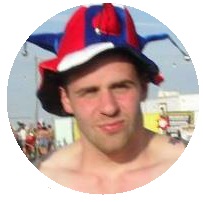 As I reach my mid-twenties it was inevitable that some of my closest friends would eventually grow up long before me; buy a house, have a baby, get married etc. and while I’m over the moon for these friends – despite cutting the best years of their lives short – on a personal level I could never take such a big leap so soon.

I have no intention, at least for the time being, to ever get married but due to the actions of some of the aforementioned friends it got me thinking about what sort of woman it would take to change my mind.

What would I consider the perfect wife material?

As easy as it would be to make a typically sexist “whoever makes a good sandwich” joke right now, I’d like to think I’m better than that, so I’ve put some thought in to it.

Back in 2010 scientists claimed to have found a mathematical formula for the perfect wife, which in a nutshell concluded that a bride should be five years younger than the groom, share the same cultural background and be the more the intelligent of the pair if a marriage is to succeed.

Now with the exception of intelligence, I’ve seen all of the above most mornings on Jeremy Kyle and it’s hard to believe they’re destined to live happily ever after despite the best efforts of Jezza and Graham, so I came to my own conclusion and that is that this survey is utter trollop.

The perfect wife I’d assume should be no different to what a woman would regard as the perfect husband. Marriage is essentially teamwork and therefore both man and wife should have a similar level of intelligence, same interests, equally domesticated and so on.

I don’t think it’s that complicated but it’s not something that is likely to ever interest me, although I understand why some do but who knows, maybe one day I’ll make a woman very happy… and probably miserable the rest of the time.

So it happened. I turned 25 and technically at my age and current romantic status, I’m somewhat classed as ‘on the shelf’ – oh goody.

Having said that, as a newly single person I’ve been thrown into the ‘Dating Game’ without really having any prior knowledge or experience – constantly being in relationships for nearly a decade leaves you slightly lacking on what is the social norm.

But, through my relationships and recent singledom I have so far learnt the following things:

My first actual relationship was at age 17 with a lad I met on a summer’s day through mutual college friends. Hormones were rife, drama was daily and the easiest way to sum the year-long partnership up is simply, psychotic. One day said lad promptly disappeared without us having actually broken up – technically we’re still together, 8 years going strong.

2. Telling people you dated your boss gives the wrong impression

Even if you were only a Christmas temp, worked together for a mere eight weeks and were a couple for five years – despite all of these factors, people will immediately assume you’re that kind of girl…

3. Parents can get a little too involved

It’s always nice when your parents approve of your boyfriend, it makes life easier. My parents, however, got what I can only describe as ‘attached’ to a particular ex – so much so that even though we’d broken up, he remained living with us for a further five months. #Awkward.

That sounds worse than I intended, but bear with me. Both of my more recent exes were in relationships when I met them, and though I certainly didn’t have anything to do with either of them while they were with their respective partners, not everyone you meet will always be single.

5. Just do what feels right at the time

I’d known my last boyfriend for seven years before we finally got together. Two months into the relationship, I moved out of my parents house and into my own flat – with the boyfriend in tow. Everyone thought it was mental and far too fast, and maybe it was, but at the time it worked and we both wanted to – so why not? There isn’t a life blueprint we’re supposed to follow, so as far as I see it, do what you want.

Ever. Unless you both know exactly what you a) want, and b) are doing, do not do it. Although you’re never really meant to regret anything in life (everything is a lesson, blah blah) we all make mistakes. But seeing said mistake everyday from 9 to 5 is not what you want.

7. Dating is not like Sex and the City…or any other TV show or film

There’s no closet filled with designer clothes that you get to model night after night, from one swanky bar to the next. There certainly isn’t an unlimited supply of Jimmy Choos or Louboutins and there most definitely isn’t a swarm of handsome Prince Charmings waiting to woo you.

8. Sitting in your pants eating Pringles and watching Netflix is frowned upon

When you’re in a relationship, staying in and watching telly is socially acceptable. When you’re single, it’s considered a little sad. Apparently I should be ‘putting myself out there’ and letting my friends who are in relationships live through me as I recount my dating escapades. But all I really want to do is sit in my pants of an evening, feast on Pringles and watch everything on my Netflix list.

9. Men and women can never be ‘just friends’

As demonstrated here. The naive amongst us will inevitably experience what is apparently known as a ‘classic smash and pie’ by someone you thought was a) a friend, and b) genuine. Pick yourself up, learn from it and above all, never let it happen again. Men are never in it for the friendship and the sooner you discover that, the easier (and shittier) the world becomes.

The most important thing I’ve learnt in the last ten years is that you should always put your happiness first. I know that I deserve to be happy regardless of my romantic status. I was in a relationship and I was happy – as soon as I wasn’t and I knew it couldn’t be fixed, I got out of it. I’m single, and although I have no idea what I’m doing, I’m rolling with it. I’m not going to spend this time pining for Mr Right, I’m just going to be happy.

But which is better?

I’ve decided to assemble a list of the pros and cons of being in a relationship to see if I can come up with a definitive answer.

I really struggled to come up with the pros of a relationship and judging by this list it’s clear to see that I’m happy being single – but these are just my opinions.

Some of you probably enjoy spending time with that special someone on Valentine’s Day, and enjoy cuddles with no bed cover, a dead arm and a face full of hair.

Maybe I’m just a narcissist, maybe it’s because I’m still young but in my opinion there’s just too much pressure on us to find that special someone and end up rushing in to meaningless relationships that move too fast.

As an only child I spent a lot of time mastering the art of amusing myself – when I wasn’t out playing with friends, I was absorbing myself in books, films and TV series.

Although it formed a pretty vivid imagination which helped me to become a writer, it also loosened my grip on reality – to the point where a male friend told me only last week:

“You’ve seen way too many rom-coms. You need to realise that life isn’t actually like that.”

Of course he was absolutely right (not that I would ever tell him that), but it got me thinking…

Carla used the amazing Easy A quote in Fittie Friday, and that is exactly how I feel about life – so much so that that particular quote has been my bio on Facebook for a very long time:

“I want John Cusack holding a boombox outside my window. I want to ride off on a lawnmower with Patrick Dempsey.

“I want Jake from Sixteen Candles waiting outside the church for me. I want Judd Nelson thrusting his fist into the air because he knows he got me.

“Just once I want my life to be like an 80s movie, preferably one with a really awesome musical number for no apparent reason. But no, no. John Hughes did not direct my life.”

But this fantastical expectation of life, as I am slowly starting to accept, is not realistic. And that this, more importantly, is never going to happen:

It’s a sad realisation that the stories I’d immersed myself in growing up have distorted my views on life.

But, in saying all of this, I have hope. There is a great romance just waiting to happen, it might not be Hollywood-style, but if it includes Penn Badgley I’m sure that’ll do nicely…

There was an error retrieving images from Instagram. An attempt will be remade in a few minutes.